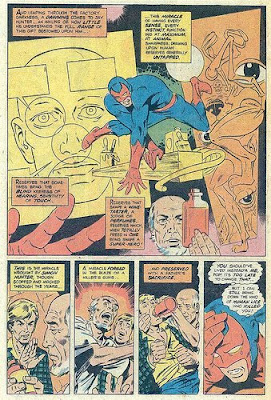 From last September, here's Wood again at the Fortresss of Fortitude. This time he's adding his marvelous inking touch to old pal Steve Ditko's nifty art on the Atlas (seventies version) character, THE DESTRUCTOR. As written by Archie Goodwin, as previously stated one of the virtually unsung GREAT comics writers of his day, the character was an attempt at a SPIDER-MAN type hero (this one with a gangster background, though!). The art is some of Ditko's best of the period and the Wood/Ditko team is always a treat. This was the story from issue 1.