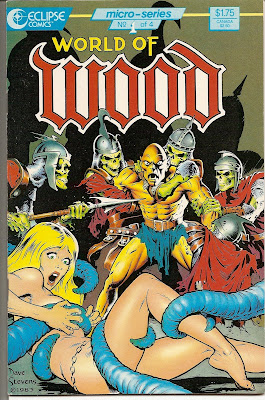 WORLD OF WOOD (with no "THE") was a 4-issue mini-series from Eclipse in 1986. It was a 4 issue mini-series that ran 5 issues. At the time, Cat Yronwode and Dean Mullaney's Eclipse Enterprises had picked up reprint rights to various "one-off" stories from a number of popular comics creators and was running newly colored comics by each individual illustrator. Wallace Wood fared best with his series, thus the extension to an extra volume that came out 3 years later. Let's take a look at Woody's series issue by issue.
Issue 1-We start with a Wood homage cover from the then hotter-than-hot Dave Stevens. Encompassing Wood trademarks such as skulls, shadows, detailed armor, a semi-naked blonde and at least the hint of a slimy monster, this is a most inviting start to the series. In fact, it's 1983 copyright would seem to indicate that this series had long been in the planning. The series logo is, naturally, based on Wood's classic gothic lettering of his name. Inside, we open with a nice, informed essay on the importance of Wally Wood to comics. Then we have what is arguably his second-best Warren story, "The Curse," from VAMPIRELLA. This is the one Stevens based his cover art on. Although a bit dark, the colors lend an extra layer to this brief but well-told fantasy fable. Up next is a Warren horror piece with Woody's Snorky substituting for Uncle Creepy (or was it Cousin Eerie. The worst thing about these v 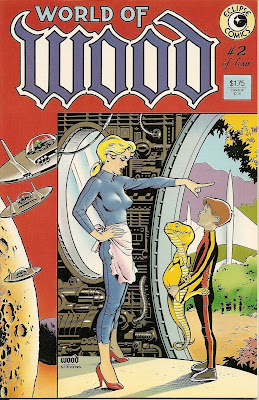 olumes is that they do not detail the original publication). The highlight of this issue is the bright, fun MISFITS story from the Bill Pearson-published HEROES, INC #2. We round it out with the lesser of Wally's BLAZING COMBAT stories, again with a color scheme almost too dark (due to all the use of Zipatone on the originals perhaps?).
Issue 2-The cover here is based on a sketch by Wally Wood that had previously appeared in the second WALLACE WOOD SKETCHBOOK. It's a cute "Ma, can I keep him?" drawing painted up here by (again) Dave Stevens. It was popular enough to warrent a poster that stayed on my walls for years. The Yronwode piece from the previous issue is repeated on the off-chance that someone buying these books would not be already familiar with the artist. First up is "The End" a semi-surreal story set in Woody's self-created "World of the Wizard King" an originally published in this form in his own WOODWORK GAZETTE. "The Cosmic All" was EC-esque sci-fi from Warren again. "War of the Wizards" is a traditional sword and sorcery piece. All three stories this issue feature some particularly nice art and the coloring seems better.
Issue 3-The cover here seems a tad busy and distracting to me. It's a Wood sketch finished up by Bret Blevins and Woody's old EC cohort Al Williamson. It's good but not great and I would not have used it for the cover, particularly 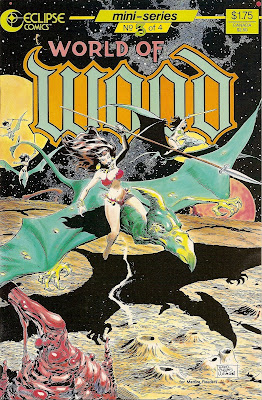 as it partially obscures the title which is what would, in theory, be selling the book. This time we get a reminiscence from former Woodworker Nick Cuti. "Prelude to Armageddon" is a lesser Warren strip but still fun with its swordfighting centaurs, undead warriors and lots of naked ladies, all painted up in a rather murky job by one Nancy O'Conner. BLAZING COMBAT's "The Battle of Britain" comes next with a controversial Warren sci-fi piece rounding out the issue. According to THE WALLACE WOOD CHECKLIST, "The Manhunters" (credited here to writer Gerry Boudreau) was originally written by Wood but extensively rewritten by then-editor Bill DuBay, the first of several times he would do this to the increasing agitation of Wood. As presented here, however, it features superior art (with Paul Kirchner) and wonderful color from Woody's old EC colorist Marie Severin.
Issue 4- This time the cover is pure Wood--a signed painting with a naked girl, a warrior, a huge slimy monster (nobody did 'em slimier than Wood!), a ton of skulls! That said, it appears to be an earlier and lesser work and probably would not, on its own , have enticed me to buy the magazin 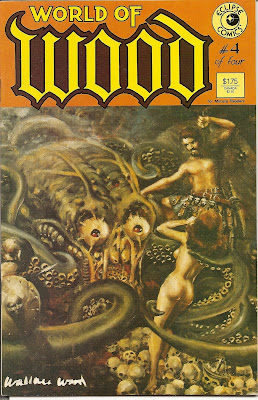 e. Inexplicably, the issue opens yet again with Cuti's remarks. They are a bit more related to the issue's content which makes one speculate that perhaps they were meant all along for this issue. Three more Warren stories are newly colored and they run the gamut. "Killer Hawk" is more lovely to look at sci-fi (story credited to DuBay) and "The Mummy" is the oft-reprinted Karloff movie adaptation done with Russ Jones. The finale here is some of Wallce Wood's best art ever. According to the Cuti intro, it's all Wood, too, done in response to what he perceived as criticism of his use of assistants. "To Kill a God" is a VAMPIRELLA reprint with more detail than any Woodwork had shown since the EC days.This is without question Wally Wood's best work for Warren. Set in ancient Egypt, it is loaded to the gills with all of Woody's stylized signatures. There's even a naked woman chained to an actual mountain of skulls at one point! Wisely, the powers that be at Eclipse chose to color this all in a light sepia that does not in any way obscure the magnificent detail. It works and it is an excellent way to end the series.
Issue 5-Then, without warning, issue 5 turned up nearly three years later. This one's cover appears to be a colored up version of an unu 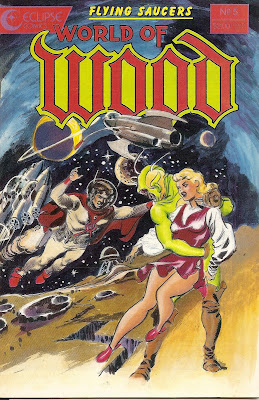 sed sci-fi cover sketch from Wood's very early professional days. Inside, with no explanation as to why we have another issue, we get a black and white, Theakstonized reprint of 1950's FLYING SAUCERS # 1 (actually credited now!). It's a fun story and it's followed up by "Skull of the Sorcerer" another very early PD story actually drawn by Al Williamson but nicely inked by Wood.
With a ton of public domain sci-fi available from the early 1950's, it's entirely possible that Eclipse planned to continue WORLD OF WOOD but the collapse of the independent boom and personal conflicts between Yronwode and Mullaney--as well as a disastrous flood that cost the company a not-so-small fortune--led to the demise of the company.
Posted by Booksteve at 2:15 PM