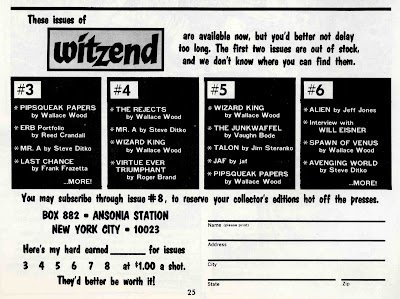 Here's an ad for Wood's (and later Bill Pearson's) WITZEND that appeared in a 1969 issue of Roy Thomas's revived ALTER EGO fanzine. While that revival didn;t take (no doubt due to Roy's busy schedule at Marvel) a later one would and is still going today with frequent appearances by Woody and his work. Note that this ad eschews art, preferring to sell the product on the strength of its contributors!
Posted by Booksteve at 6:24 AM