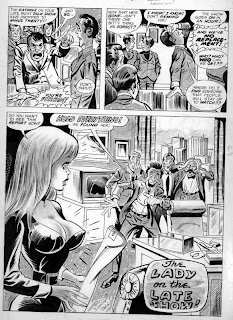 Well, this IS PUSSYCAT. The question mark above comes from the assertion on the Comic Art Fans website that this is:
A) from the first PUSSYCAT story published in "a MALE annual"
B) Has layouts by Wallace Wood and art by Jim Mooney

More than 20 years ago, I researched and wrote an article for AMAZING HEROES on the obscure Marvel (sort of) sexy heroine strip called PUSSYCAT. The 1968 one-shot collected a number of the stories of the character but many remain rare and completely uncollected to this day. It is, however, a widely held belief that Woody worked on only the very first story which was, in fact, printed in the one-shot. In fact, I speculated in my article that Steve Ditko may have helped with it as it looks a bit like the work that paring turned out at various times. That story was done in 1965 when Wood was still at Marvel finishing his DAREDEVIL run.
This page, however, is NOT from that story. I am fairly sure this is a later piece as the strip ran for at least five years in various issues of Martin Goodman's mens' mags and was reprinted in same well into the 1980's! Following a long run by veteran Bill Ward (BLACKHAWK), many of the later strips were nicely drawn by Jim Mooney. As the owner says, this does appear to be Mooney but I don't see the slightest trace of Wood or even Wood influence. Outside of Pussycat herself, in fact, I think I would be hard-pressed to identify this as Mooney! Some parts still look like Ward to me. Could Ward have done the layouts?
Dating this piece beyond 1965 would have Wally pretty busy at Tower and then at DC. He could conceivably done layouts for later stips when he returned to Marvel around the turn of the decade but why? If you have Wally Wood working on a strip with naked and semi-naked girls, it would be waste to JUST have him do layouts!
When I wrote my original article in 1987, I got a few things incorrect so it's possible I'm wrong here. There's very little actual info out there on PUSSYCAT even in these instant knowledge Internet days. Does anyone out there know the real, full extent of Wood's involvement? COULD he have done layouts for this piece? I say, "no." What do my readers think?
Posted by Booksteve at 10:24 PM