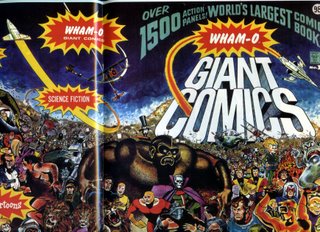 Adapted from Booksteve's Library 7/06
Whatever else you want to say about it, this is one of the hardest comic collectibles to store! WHAM-O GIANT COMICS # 1 (and only) dates from the year 1967 but to the best of my understanding was not distributed at that time. Apparently the entire warehouse stock sat for several years and then was sold off in bulk. I bought it at a Dollar store circa 1970 for, if I remember correctly, fifty cents. Being as huge as it is, this cover scan (which is itself only a partial view) comes from a double page spread in the Wally Wood issue of COMIC BOOK MARKETPLACE. Clearly it was intended as a regular series as there is a six issue subscription ad contained therein. Six issues were $4.98. Considering the size, however, your mailman would have hated you and if all the kids in the neighborhood had subscribed, he may well have gone postal!
Put out by WHAM-O toy company, it was intended to be a sales vehicle and feature ads fro WHAM-O products 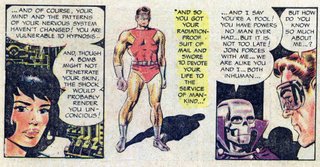 along with the stories. The incredible cover art is signed by W.T. Vinson. I’ve read that LITTLE LULU guru John Stanley had some wo 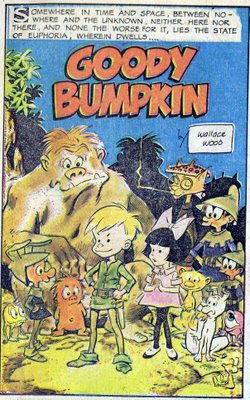 rk in this and I think I recognize some very late Lou Fine. The whole book has some of the worst comic book coloring I’ve ever seen and the eclectic mix of styles reminds me of a British Annual and the American Boy Scout magazine, BOY’S LIFE.

The real highlights here, though, are two marvelous pieces by Wally Wood. The book opens with RADIAN, a T.H.U.N.D.E.R. AGENTS style hero. Later on we have the first appearance of GOODY BUMPKIN, Wood’s fantasy version of his space kid hero BUCKY RUCKUS The GOODY story is one of Woody’s all-time best, filled with his trademark puns and humor and some of his smoothest art from that whole period.

It’s hard to store, it’s hard to find and with its teeny tiny panels, it’s even hard to read but for fans of the esoteric or more particularly fans of Wally Wood, WHAM-O GIANT COMICS is a must-have!
Posted by Booksteve at 2:05 AM