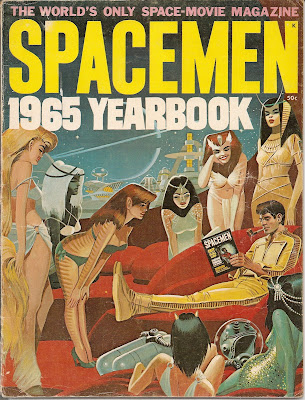 By the time of this 1965 YEARBOOK, Warren publishing's SPACEMEN, a sci-fi companion to their long-running FAMOUS MONSTERS OF FILMLAND and MONSTER WORLD, was ending its relatively brief run. Why they didn't get Wood to be their cover artist every month is a mystery as this Russ Jones/Wally Wood collaboration is still a favorite of many fans. Jones had worked with Woody on a black and white comic adaptation of Universal's THE MUMMY for Forrest J. Ackerman (who was surprisingly NOT the editor of SPACEMEN), reaction to which, one can assume, convinced Warren to go forward with his magazine EC clone, CREEPY with Jones as its initial editor. Going forward, Warren quickly closed up shop on his sci-fi mag as well as a western mag, a serial and B-movie mag, MONSTER WORLD and other one-shots. Keeping only his flagship FM, CREEPY would lead to EERIE and VAMPIRELLA, all of which would feature superior work from Wallace Wood from time to time over the following decade after this SPACEMEN cover. Then they finally started a sci-fi mag again...and proceeded to screw Woody over big-time. But that's another story.
Posted by Booksteve at 12:57 PM