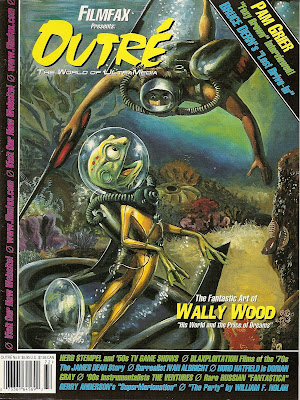 OUTRE' was a companion magazine to the long-running (and STILL-running!) FILMFAX. It was subtitled "The World of UltraMedia," which kind of meant, "Hey! Here's some COOL stuff!!" Each issue would cover a grab bag of pop culture. For example, this particular issue, 1997's # 9, features articles on Blaxploitation and Pam Grier, Soviet sci-fi, actor Bruce Dern, UK puppeteer Gerry Anderson and surf musicians, the Ventures. Cover-featured, though, we have, in what is arguably his biggest more-or-less mainstream public exposure to date, Wally Wood! Taking a 1959 gag painting from a GALAXY cover for its own, this issue offers 6 illustrated pages of a perceptive multi-part article/biography written by David J. Hogan and begun two issues earlier. It's continued in the following issue.
Posted by Booksteve at 7:41 AM