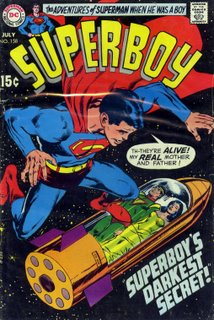 Edited. Originally published at Booksteve's Library 6/06
In the late sixties, artist Bob Brown had a healthy run on DC’s SUPERBOY, abetted by inkers such as Jack Abel and the great Wally Wood. The issue seen here, # 158, dates from mid –1969 and features an incredible, apocryphal event in the life of our hero—the discovery that his Kryptonian parents are still alive! Writer Frank Robbins had drifted in from his long-running newspaper strip JOHNNY HAZARD and proceeded to do a number of unconventional stories for FLASH, BATMAN and SUPERBOY. This particular one, while interesting on its own merits (and the absolute ONLY time I’ve ever seen the word "inculcated" in a comic book!) flew in the face of all established continuity. SuperMAN’s parents had not been found alive floating in cryogenic sleep in a kryptonite rocket, therefore, how could SuperBOY’s parents have been?
Basically, Supes picks up a space message in Kryptonian claiming to be from Jor-el and Lara. 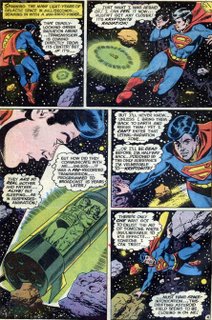 Using a "mini-radio-finder(??)" he finds them floating in deep space but asleep. Suddenly he bumps into a fake asteroid that turns out to be a nuclear mine that sends him reeling toward the deadly Green K capsule. Seems this evil Kryptonian villain named Xonar had been using Jor-el and Lara as bait to destroy Superboy as Jor-el had thwarted his evil plans back in the day. That’s okay, though, because, you see, this benevolent Kryptonian scientist named Krylo shows up and saves the Boy of Steel in the nick of time. Whew! Lots of living Kryptonians around here. Tell me again why Kal-el is called the Last Son of Krypton? 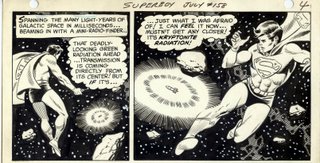 Krylo explains that while Kal was being loaded into his rocket, he (Krylo, not Kal) suggested that Jor-el and Lara get cryogenically frozen with him and sent off into space to avoid the planet’s impending doom. 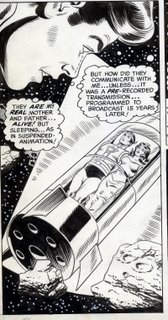 They declined but agreed to send their son a message that Krylo could deliver when the boy was fifteen so he could understand it. Slow learner? After recording the message and firing off their firstborn, Krylo conked ‘em and froze ‘em anyway, blasting them, along with himself, into space in two separate rockets. Meanwhile, on the other side of town, Xonar’s prison fell apart due to Krypton’s earthquakes (Errr…why wasn’t he in the Phantom Zone?) and he escaped the planet’s death in a rocket. You know…a rocket…one of those things that, according to tradition, there weren’t any of around which is why Jor-el could only send a tiny baby in his itty bitty prototype. Sigh. Continuity be damned sayeth Robbins! I just wanna tell a good story. You know, like Bob Haney!
Anyway, Krylo explains that Kal’s parents can, in fact, be revived but, since the outer hull of their ship is now Green K, they need help to do so. Enter…PA KENT! This is the new, recently improved, younger version of Pa and he’s soon suited up and dragged off into deep space with a tow line. 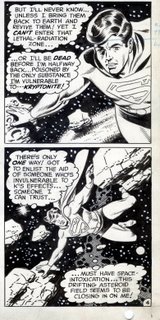 That creep Xonar is still hanging around though with his nuclear mines disguised as asteroids and he cuts the line! Dammit! Supes is royally pissed (to put it mildly) and flings Xonar into one of his own nuclear mines…err…accidentally, of course. Kablooey! OOPS! Just killed a guy. Say, where’d everybody go? Seems Krylo sacrifices himself to rescue Jonathan Kent, who then is able to get the tow line to his son who then flies the whole shebang back to earth. They, of course, take it immediately to Superboy’s secret Polar "Cave of Science." Yeah. You know the one. Not the later Fortress of Solitude, mind you, but the little known "Cave of Science!" Uh-Huh. While trying to open the nose cone, Pa accidentally replays the original message which, when you hear the whole thing, points out that if his parents ARE revived, they would die a long, painful, lingering radiation death because Jor-el had contracted radiation poisoning while investigating Krypton’s seismic troubles. Awwww, maaaaaan! He sends the ship back into deep space. After this, Superboy’s darkest secret, the fact that his real radioactive parents are frozen in space but COULD possibly be alive again someday is simply never mentioned again and, after Crisis upon Crisis, no doubt never happened anyway!
The art on this issue is very good with Woody being quite a good match with Brown (longtime artist on CHALLENGERS OF THE UNKNOWN). Continuity-wise, though, we have Jor-el, long established as preferring green jumpsuits, wearing red yellow and green with a triangular (as in "S" shield) geometric symbol on the chest. Nice touch. Dr. Krylo’s geometric shape is a diamond…at first. At some point, the artists started drawing his as a triangle, too! 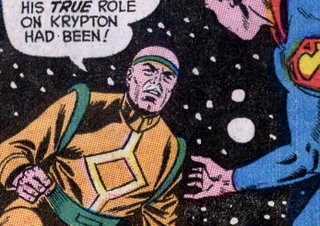 Note the black and white panels, here. These are close-ups from one of the very few pages of original comic book art that I possess. It just happens to be the seminal page from this important epic in the life of the Boy of Steel! Or at least it would have been if this had occurred in any kind of real continuity. 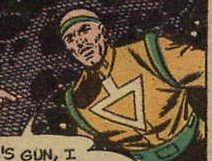 As with the dreaded Mopee story in FLASH, somebody at DC wisely said never to mention this again. Eventually, perhaps feeling that his most original stories were unappreciated, Frank Robbins returned to drawing where he did, among others, BATMAN, THE SHADOW and a long run on Marvel’s INVADERS, all in his erratic, quirky, Caniff-inspired style. Bob Brown continued with SUPERBOY into the early seventies and finished his career with a good run on DAREDEVIL just prior to that book being Millerized. Wally Wood went on to ink a Miller DD cover as his final professional comics job. Jor-el and Lara, as of this writing, are dead and, quite frankly, I’m not sure this particular version of Superboy ever even existed in current continuity. Do I even exist? Do you?
Posted by Booksteve at 6:43 AM