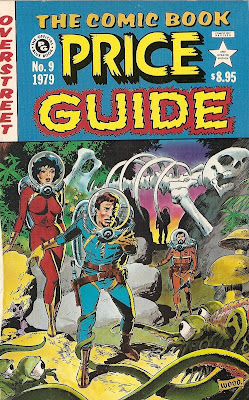 Just a couple of years prior to his death, Wallace Wood was invited to provide the cover for 1979's 9th edition of Robert Overstreet's COMIC BOOK PRICE GUIDE. The editorial section of the annual volume was to be in part a special tribute to EC Comics and Wood was chosen as the artist who most personified EC's classic sci-fi stories. Although the nicely colored cover offers all of Wood's trademarks--the slimy aliens, the shadows, the bubble helmets, the cute l'il creature, the unspoken "Good lord!" from the stalwart spaceman and the gorgeous, bra-less female, I remember being disappointed in it at the time it come out. In retrospect, I would suspect this would be due to Wood's illness creeping into his work. 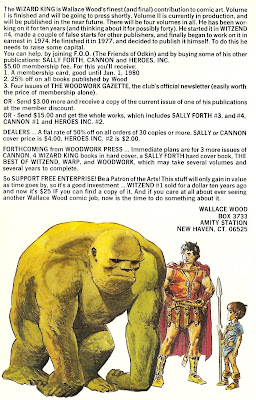 Perhaps in compensation for his cover, Wood is granted prime ad space for the full-page announcement of FOO, his Friends of Odkin Fan Club. The ad highlights some neatly painted characters from the his pet WIZARD KING project including Odkin himself (the short one if you're new to all this). Note that in the ad, the artist says there would be four volumes in all. The first came out in a black and white hardcover, then a thin trade reprint from Phil Seuling (with colors by Woody's Ex, Tatjana). The second volume, largely completed by assistants, appeared only as a B&W hardback some time later. The third volume was left uncompleted as I understand it and never published at the time but is supposedly coming soon from Vanguard. I've seen a few panels and they could have been a lot worse. But a fourth volume?
Posted by Booksteve at 11:32 PM