The Golden Trashery of Mad 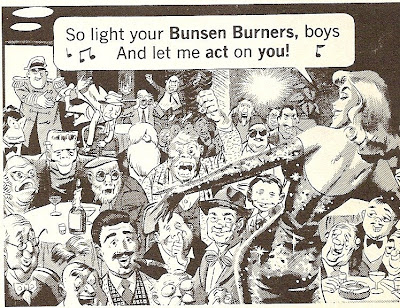 1960's GOLDEN TRASHERY OF MAD is the third (and if one can believe the Internet the scarcest) of the original three MAD hardcover collections. Featuring a new and as far as I know never reprinted introduction by the 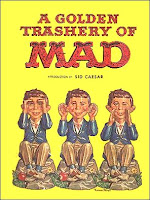 great TV comedian Sid Caesar, this collection of then-recent work by the proverbial Usual Gang of Idiots is just chock-full of incredible Woodwork!
In fact, there are no less than 36 pages in this volume by Wallace Wood! Other contributors include Frank 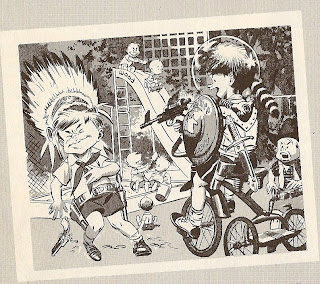 Jacobs, Joe Orlando, a pre-LIGHTER SIDE OF Dave Berg, Bob Clarke, George Woodbridge and Larry Siegel. There's also some early Don Martin, not enough of the already amazing Mort Drucker and some incredible pieces by longtime cover artist and sci-fi great Kelly Freas.
Wood's pieces--some painted, some drawn, some heavily screened, some cluttered and some spare-- are as follows:
1-How to Make America's Kids Science Conscious
2-Spot That Plug
3-The Truth About Before and After Ads
4-The Mad Horror Primer
5-Report to Russia
6-Testing Civilians For Space Flight
7-Coast-to-Coast for $16.75
8-A Best Seller Hits the Commercial trail
9-Bitter Homes and Gardens 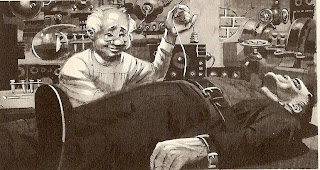 The whole thing was, of course, published and edited by G 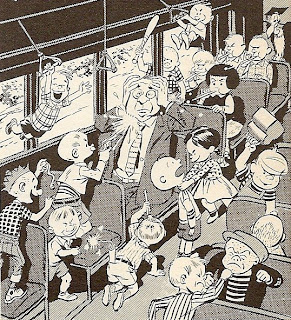 aines and Feldstein and the humor is strongly representative of MAD's early peak years as a magazine. It was subversive but not yet fully acce

pted by the mainstream. Many (myself included) will argue that the early sixties issues were the Golden Age of the Post-Kurtzman MAD. Woody's art here is playful and seems quite enthusiastic, rich and for the most part highly detailed and with his traditional running gags such as the little kid with the wagon ad the guy in a spacesuit. Also on view is his wonderful capacity for caricature and style imitation. Just in the exa

mples seen here you can find Jack Webb, Benjamin Franklin, Gomez Addams, The Great Gildersleeve (or is that Ernie Kovacs?), Alley Oop and others!
If you ever come across this or any of the MAD hardcovers from this period, grab 'em if you can afford them. They're a funny time capsule of society and pop culture for comics fans everywhere but particularly for fans of Wallace Wood!
Posted by Booksteve at 4:32 PM