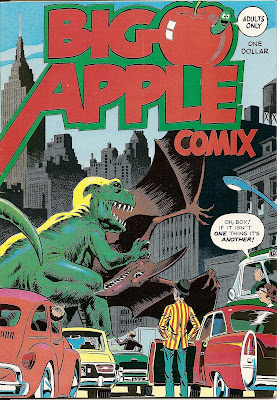 In 1975, (Fabulous) Flo Steinberg, once Stan Lee's trusted "gal Friday," edited and published her own comic book, the ode to New York City and all its issues, foibles and problems that was called BIG APPLE COMIX. As Mick Jagger sang, "Bite the Big Apple. Don't mind the maggots!" While Wikipedia cites the sole issue as a link between underground comix and just plain independent comics that merged in the eighties, there's no question that it was, in spite of the mainstream creators involved, intended as an underground.
BIG APPLE COMIX is filled with the most explicit (albeit satirical) hardcore sex scenes Wally Wood had been associated with to date. Clearly Ms. Steinberg had raided old friend Wood's studio as Wood was involved with the cover, wrote and drew one story, wrote a second and inked a third. Meanwhile, his sidekicks at the time were everywhere around the issue, too, with Ralph Reese given the color back cover, Paul Kirchner having a strip of his own and Larry Hama and Reese doing an unusual side by side story with Neal Adams. Other creators, mostly moonlighting from Marvel, included Stu Schwartzberg, Herb Trimpe, Alan Weiss, Mike Ploog, Marie Severin, Linda Fite, Michele Brand and John Verpoorten. Wood's fellow EC cohort, Al Williamson, is represented with a stunning three pages that apparently took him 17 months to draw! Denny O'Neil provided an introduction.
Woody's main contribution is MY WORD, a dark, bitter

, pornographic parody of his (and Feldstein's) EC sci-fi classic, MY WORLD. In retrospect, especially, it seems to say a lot about where Wood was in his head at the time on any number of subjects. Happy was not one of them. Nonetheless, this is notable as probably his best work of the period other than THE WIZARD KING and certainly his most personal.
The Williamson sci-fi short (which seems to star Roy Thomas!!?) is credited to author W 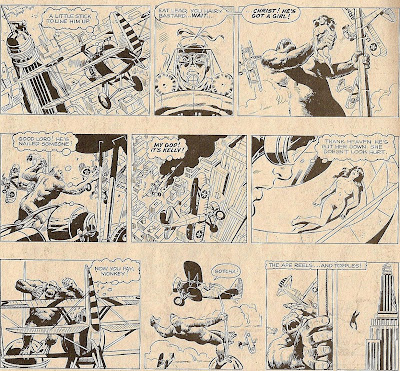 ood and his final appearance is as the inker on a two page Herb Trimpe tale of King Kong, a NYC legend if ever there was one. It's not substantial but it has always been enough to make me wish he had inked more of Trimpe's work.
The marvelous cover with dinosaurs battling in Manhattan during rush hour is credited to Schwartzberg, Hama, Kirchner and Wood (with colors by Michele Brand). Logically that would seem to indicate basic idea and layout by Stu (mostly known for his humor work), and then Wally and his assistants finishing it up. It is a perfect example of how nearly every piece Wally Wood worked on became Wood artwork once his magic touch was added.
Not numbered, BIG APPLE COMICS was probably intended all along as a one-shot as many undergrounds at the time were (even as

that market itself faded). Flo Steinberg, although remaining an almost mythical figure in early Marvel comics history, did not publish any more comics. Wood's foray into pornography, however, would soon go deeper.

In early 1982, in tribute to Wood after his then-recent passing, a variation of the BIG APPLE COMIX cover was used on my own self-published NOT READY FOR DRIVE-TIME NEWSLETTER # 3. This version was quite nicely adapted by my cohort then and now, Ms. Terri Riegler with contributions from myself and colored by the two of us.
Posted by Booksteve at 7:13 PM