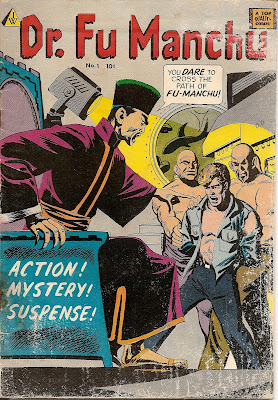 As the story goes, one Israel Waldman bought a bunch of junk printing plates in 1958 featuring comics stories from defunct publishers and--copyright be damned--started publishing them! There's a lot more interesting bits to that story but this post isn't about that. It's about one particular book his IW company printed during their 1958-1964 existance-DR. FU MANCHU!
DR. FU MANCHU reprints in full color the 1951 full-length MASK OF DR. FU MANCHU comic that I said yesterday is generally believed to be Woody's best from this period. Waldman apparently never got cover plates so all of his covers were newly done, often by folks such as Ross Andru, Mike Esposito or Sol Brodsky. GCD attributes this one with a question mark to Brodsky (who would later team with Waldman to create SKYWALD but that's yet another story again!) but I don't know. Looks to me like it could be John Giunta or even Manny Stallman but then I'm not that familiar with Brodsky's art. One thing's for certain and that's that it isn't Wally Wood's striking cover for the original! It also omits the famous inside cover "teaser" Wood did (seen here) but otherwise faithfully reprints the original.
The story itself (found in its entirety here: http://grantbridgestreet.blogspot.com/2008/06/wally-wood-mask-of-fu-manchu.html )is a rousing old fashioned pul 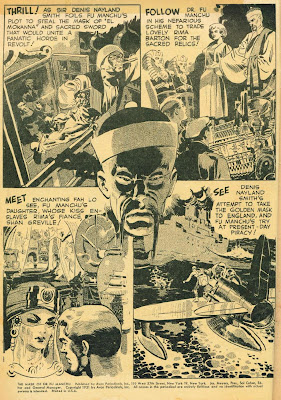 p adventure, translated with style into Eisner-influenced comics art. GCD credits the actual art to Joe Orlando and the inking to Wood which is possible but much of the layout and style harkens to early Wood sketches so I can't help but think there was more of a collaboration than that.
The problem one encounters when dealing with Fu Manchu is, of course, Fu himself. Created at a time when 19th century fears of the different ways of the Orient lead to talk of a "yellow peril," Fu Manchu embodied the West's nightmares in one dreadful super villain. The star of quite a few rousing pulp novels in which author Sax Rohmer would lovingly detail the insidious tortures t 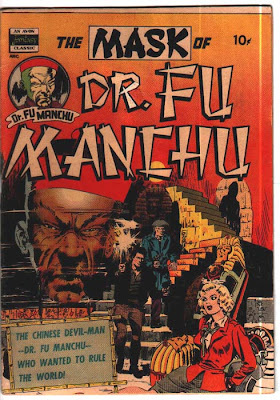 he mad immortal doctor would inflict on helpless, often female, victims, the hapless hero, Sir Denis Nayland Smith would always come back again and again to confront his evil schemes.
Fu appeared in a couple movies in the early days of sound includ 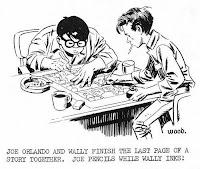 ing a classic Karloff portrayal. Christopher Lee later appeared in the role for a number of 1960's vehicles of lessening expense and quality.
The novels were reprinted over and over up through the 1970's when suddenly they just felt so wrong and antiquated as to get awkward shudders or laughs rather than the chills they were meant to inspire. Marvel licensed the character during that period but wisely chose to morph the whole thing into the superior MASTER OF KUNG FU series with Shang-Chi and minimize Fu Manchu to the point where eventually he faded from use in the series completely.
Posted by Booksteve at 12:49 PM