Sky Masters of the Space Force 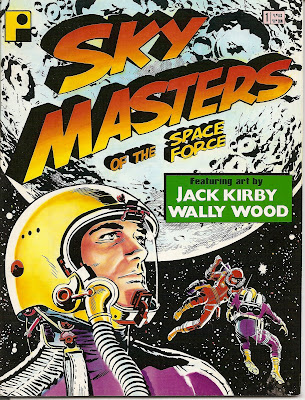 Here we have another Wood-related treat from Greg Theakston's Pure Imagination. This 1991 magazine sized volume was apparently supposed to be the first of several reprinting the 1958 newspaper comic strip SKY MASTERS OF THE SPACE FORCE. This strip, although still little known, is generally recognized as an important step (along with DC's more-or-less contemporary CHALLENGERS OF THE UNKNOWN) toward the development of THE FANTASTIC FOUR. Jack Kirby was no longer working exclusively with Joe Simon and with the popularity of the real-life race for space decided to test the waters of potentially lucrative syndication. Wally Wood, although still the workhorse at MAD, came along to ink although he was occasionally spelled by (among others?) Marvin Stein or Dick Ayers.
SKY MASTERS OF THE SPACE FORCE was essentially a standard newspaper strip soap opera with a mild sci-fi element. It also featured some of the best art ever from either creator. Wood's smooth inking rounded off Jack's seemingly purposely muted dynamism in a manner that at once highlighted the best stylized traits of both artists and minimized their flaws.
This volume offers a brief behind-the-scenes look at the making of the strip, some rare art shown at various stages and some nicely colored Sunday strip reprints. Kirby was clearly stretching his storytelling muscles within the strip's restrictive lines and his rapidly evolving style is easy to see as you read along. The characters strongly resemble the later Challengers (also inked by Wood initially). Wood's use of blacks and shadowing in general is uniformly outstanding.
SKY MASTERS OF THE SPACE FORCE has been reprinted in several places over the years with a supposedly wonderful European volume being the most complete. This one, though, offers nice reproduction and is a most enjoyable introduction to this dated but important strip.
Posted by Booksteve at 9:49 PM