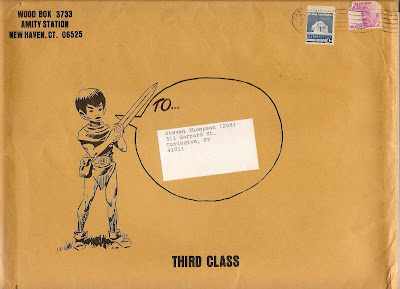 When Wallace Wood started publishing his own works in the late 1970's, I was there. I bought the first SALLY FORTH oversized reprint at a comic book convention but beyond that I tended to order from Woody. One plus was that he often signed them if I asked. In one he even had a little note (sadly lost!) answering some simple questions I had asked and saying I should call him "Woody." Here we have, I believe, the envelope that my "original" art of SALLY FORTH (ghosted by Paul Kirchner) came in. Can't believe I still have the envelope but not that note! Financial difficulties in recent years led me to sell all of the signed CANNON and SALLY FORTH volumes, also. Sigh.
(For the record, I haven't lived at that address in 17 years now.)
Posted by Booksteve at 1:20 PM