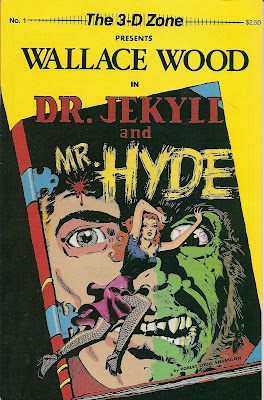 In 1987's 1st issue of the comic book, THE 3-D ZONE, obsessive 3-D promoter Ray Zone offers up Wood's early comic book adaptation of DR. JEKYLL AND MR. HYDE done with future sci-fi author Harry Harrison (creator of THE STAINLESS STEEL RAT). I've never been able to see the traditional red/blue 3-D myself but based on Zone's reputation for excellence it's probably worth seeking out if YOU can.
If not, the same story appears in non-3-D form in 2004's trade collection THE WALLACE WOOD READER, another offering from Greg Theakston's Pure Imagination. Here one can easily see the major influence Eisner was having on the young artist(s).
Also included in this treasure trove of those early public domain stories mentioned in a previous post is THE MASK OF FU MANCHU, a full-length 1951 book often cited as the artist's best work of this early period. 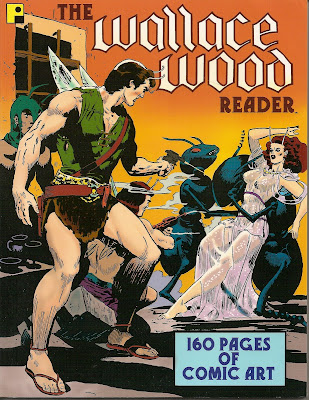 Fully thirteen additional stories round out this collection including all 3 from WAR AND ATTACK # 1 reprinted previously in WALLY WOOD WAR. The rest are all more early space opera including stories with CAPTAIN SCIENCE and SPACE DETECTIVE. Again, as stated previously, it's fun to watch Wood developing his trademarks as you read along. A final, post-EC sci-fi tale from 1956 shows just how remarkable that development had been in just four years!
The only unfortunate thing about this nice package is that some of the pages are a little murky. This may or may not have anything to do with the fact that all of the pages have been "Theakstonized." This, if you're unfamiliar with it, is a process developed by Theakston and widely utilized by the major comics companies. As I understand it the process essentially bleaches the color from printed pages for reproduction. In this case, the indicia notes that each panel has been altered ever so slightly in order to protect the company's investment.
If your're a 3-D buff or enjoy Wally Wood's dashing space operas, add both of these to your want lists.
Posted by Booksteve at 9:27 PM